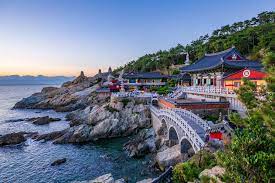 Korea was divided into North and South Korea in 1945. The erratic and often openly hostile North Korean regime remains an ongoing source of stress and uncertainty for South Korea. Both nations have endured an immense amount of adversity since the war, and South Koreans have been significantly toughened by years of instability. The need for adaptability, tenacity and education have been ingrained into South Korean life. These contemporary attitudes have intermingled with older Asian traditions. The new cultural combination has worked in favor of the country’s development, seeing the nation rebound and thrive economically, and begin to heal psychologically.

The South Korean sense of national belonging and pride remains very strong and stems from some of the historical challenges which they have faced. The country is overwhelmingly ethnically homogeneous with over 96% of all South Koreans sharing the same Korean ethnicity. This common identity provides societal unity and supports the collectivist orientations of the culture.

The business environment is evolving rapidly, and norms and customs are changing quite quickly. Western companies will be impressed by the strong service orientation and the high degree of connectivity throughout the market. Western companies should note that the average per capital income is about 3 times that of China.

The sophistication and modernization in approach is breaking down some of the traditional customs and means that you need to do your homework relating to the culture of your specific counterparty. The ongoing pandemic has had an effect on Western companies and diplomats as it has been harder to meet and connect with South Korean executives and government officials. Also, the tradition of after-hours drinks among South Korean colleagues has also suffered because of the pandemic.

Confucian values are still very evident in South Korean business culture. This way of thinking promotes the idea that relationships between people are unequal with defined hierarchical roles (for example, ruler and subject, husband and wife, father, and son). When this natural inequality is accepted and respected, it becomes easier to maintain harmonious, stable relations among individuals and, therefore, in the society.

The Confucian logic of obedience, responsibility and adherence translates into a variety of Korean behaviours and attitudes. One will notice that within South Korean society, interactions are tiered, requiring a level of deference and respect from one party – particularly in business. In the social hierarchy, one’s position, occupation and level of education is an indicator of status. However, age is often an overriding factor that determines the level of respect one should be shown.

On the Corruption Perception Index (2020), South Korea ranks 39th out of 180 countries. This perception suggest that the country’s public sector is moderately clean from corruption.

Western companies should always be mindful of transparency and ethical issues as they navigate in international markets and undertaking sound due diligence while drawing on a variety of sources to confirm information is recommended. Having said that, ethical issues will unlikely be overriding concerns in the South Korean market.

The concept of face is central in influencing South Korean behaviour and thinking. This is the quality embedded in most Asian cultures that indicates a person’s reputation, influence, dignity, and honour. In South Korea, the perceptual lens of face is taken especially seriously. It gained new importance during the hardships of the 20th century as people had to learn to control their rage and frustration under a mask of stoicism. However today, though great effort is still made to disguise one’s true feelings, many Koreans are now less concerned about appearing completely stoic and are sometimes unable to hide or control their temperament.

South Koreans often go to great lengths to disguise their social, financial, and academic status if they are in a ‘shameful’ situation (i.e., divorce, unemployment, poverty, bad grades). By complimenting a person, showing them respect or doing something to increase their self-esteem, you give them face.

Hierarchy continues to be an important concept in South Korean business and most relationships are hierarchical. The individual in the “superior” position is treated with respect while the “junior” is subservient (sometimes to the point of rudeness by Western values). Age, position in the company, education, and marital status all determine one’s “rank” in society.

Westerners are often surprised that they are asked very specific and even personal questions when they first meet a South Korean. Your counterpart is trying to determine where you fit in the hierarchy. Your “rank” can have a major impact on who is willing to meet you and the nature of the dialogue. Titles are hierarchical rather than functional in South Korean companies. You need to do your homework and determine where your counterpart fits into his organization.

Most Korean businesspeople in the major cities will have a good command of English but may still be nervous about using it. So, if you know a few Korean words, phrases and can express time and numbers in Korean, it can make a huge difference in how you are perceived. Demonstrating an interest in South Korean business culture and showing a desire to learn, will go a long way in putting your counterparts in South Korea at ease and you will be remembered. Don’t assume that people in general outside of the major cities will function in English.

Though Confucian and traditional values constitute the root of societal expectations, their influence is weakening in the age of technology. Younger generations are notably more Westernized and individualistic. Bolder communication patterns are also becoming more prevalent, as shyness is now considered less of a virtue and more of a limitation. Furthermore, the majority of young South Koreans reject the traditional notions of gender roles and consider all genders and sexual orientations equal.

Despite the influx of Westernized values into South Korean culture, the society is still more restrained and conservative than that of most Western countries. The country’s economic success has largely been fueled by its educational system that produces an incredibly diligent and competent workforce. Thus, society tends to put emphasis on the importance of one’s schooling. Perhaps because of this pressure and high standards, being busy throughout one’s life is strongly valued.

While being busy is the norm, it is also true that a “rebalancing” has been taking place with South Korean companies and employees focused not only on efficiencies but a more balanced lifestyle.

To better understand your own cultural values and how they compare to that of South Korea, we encourage you to inquire about the ICBI Cultural Self-Assessment.

Be aware that Korean names written in the Roman alphabet have all been transcribed from the original Korean or Chinese characters. There are different ways to represent these characters in English, which can result in the same Korean name being written with many different spelling variations. For example, LEE may also be spelt RHEE, YI, LI, RI, LEIGH, REE, RHI or NI.

Many Koreans use a ‘westernised’ version of their original Korean name to adapt to international and English-speaking contexts.

This may involve reversing the arrangement of their given name and family name to suit English-Western naming conventions: For example, KIM Min Su may be known as Min Su KIM.

Many Koreans have an ‘English name’ that they use in international and English- speaking contexts. For example, LEE Hyori may be known as “Michelle”.

The most common family names in South Korea are Kim, Park, Lee, Choi, and Chung with around half of all South Koreans having one of these five names.

Although South Korean attitudes to women in business are changing slowly, it is still very rare for women to hold senior positions in South Korea. Consequently, the opportunity to work with a foreign company, with more enlightened attitudes toward equality, tends to be welcomed by many professional women in the country.

Interested in learning more about working with South Korea? Reach out to us here.