Lots of our clients are WEIRD 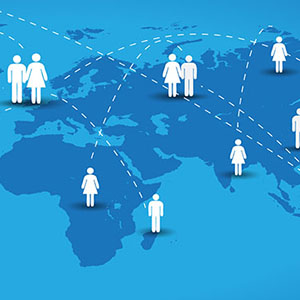 … So I’d better quickly explain what I mean by calling you WEIRD.

Joseph Henrich, Steven J Heine and Ara Norenzayan issued a research paper a few years ago showing that most behavioural science theory is built upon research that examines an intensely narrow sample of human variation – disproportionately biased towards US university undergraduates and that this has skewed the findings of a great deal of research when you try to make it fit a culturally diverse world. Their definition of the sample base was that they were quite simply WEIRD

I think that all of this seems very likely to be true but I think that you can take the hypothesis way beyond the fields of behavioural science into the world of politics and it also seems incredibly true in the world of commerce.

I spend my days working with (mainly) western companies who are international in nature and who struggle with the complexities of interacting across the boundaries of global culture, time zones and geography. We help them understand how significantly and deeply cultural differences can impact on the effectiveness and efficiencies of their global operations. The longer I work in this field the more I come to realise that this WEIRD issue is at the heart of a lot of the dilemmas our clients face.

I have come to realise that (either consciously or subconsciously) people who are WEIRD in North America and Europe look around the world and think that the rest of the world is also WEIRD or, if they are not, would really like to become WEIRD at some stage in their ‘evolution’. The problem is that probably 80% of the world (by population) actually are not WEIRD and have no desire to become so. In fact the 80% of the world’s population who are not WEIRD look back at North America and Europe and think ‘those guys are seriously WEIRD’.

Where are most global compliance policies driven from? Europe and North America on the whole. We are moving around the world trying to apply WEIRD policies, processes and ethics into an un-WEIRD world and people simply just ‘don’t get’ what we are talking about. Our core values and beliefs are simply an irrelevance to people in many parts of the world.

A very good, very topical example of this would be the reaction of the majority of Russians to Vladimir Putin’s close association with the recent Panama leaks which highlight tax evasion amongst the rich and powerful. A BBC reporter, when interviewing ‘the man in the street’ in Russia was greeted with this reaction. “People high up have always had accounts like these and they always will. Putin can’t keep an eye on everyone.” In other words – it doesn’t matter and I don’t care. Contrast that with the reactions to the news that the Icelandic Prime Minister, Sigurður Ingi Jóhannsson, was associated with the scandal or that David Cameron’s father had been named.

I’m not saying that I disagree with the ethical and commercial standpoints espoused by the WEIRD – I’m WEIRD myself – it’s more about getting people in the WEIRD countries to recognise that the ‘universal’ truths that they see as ‘self-evident’ are only ‘self-evident’ to a very small minority of the people on the planet. The starting point should be that ‘there may very possibly be a fundamental disagreement on this issue’ rather than am assumption that everybody, everywhere will ‘get it’.

It will be interesting to see, as China and India evolve as global super-powers, whether these WEIRD ideas will prevail globally or be eclipsed by other philosophies and approaches. Any thoughts from my WEIRD (and non-WEIRD) contacts?

For more information on how Global Business Culture can help you become more globally savvy contact me at keith@globalbusinessculture.com